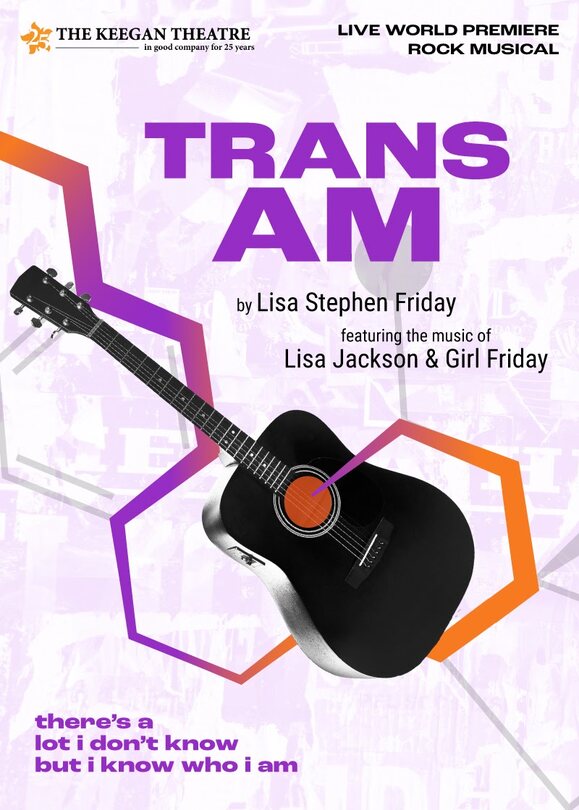 Opening January 29, 2022, as part of Keegan’s 25th Anniversary Season, TRANS AM is an irreverent autobiography that explores the most complex and personal parts of the human experience through stories and music. Lisa shares her own trans journey as a means of understanding our common human desire for self-actualization and respect while calling out the absurdity of a world obsessed with other-ness.

TRANS AM is making its live world premiere after almost two years of development with The Keegan Theatre. The concept for the show was born out of Lisa’s virtual BRS LIVE cabaret performance, produced by Keegan’s Boiler Room Series in 2020. The first full-length version of TRANS AM was produced for online audiences as part of Keegan’s 2020 virtual fall repertory, earning overwhelming acclaim for its “powerful, honest portrayal of a fascinating and gifted woman” (Broadway World) and Lisa’s “intimate, hilarious, sexy, sometimes sad, but always incredibly engaging” (MD Theatre Guide) storytelling.

“The experience of developing TRANS AM,” writer and performer Lisa Stephen Friday describes, “has helped me understand how much I have evolved not only as an artist but also as a human being. 20 years ago I used to get on stage as a transgender woman who had something to prove. Now I get on stage because I have something to share, and I hope that by sharing my experience I can be a small part of empowering other people to live authentically.”

Lisa is a musician and actor who led the NYC-based rock band Lisa Jackson & Girl Friday, one of the most buzzworthy bands in the city during their performing years of 2000 – 2006. Backed by a loyal fan-base, Lisa and the band played standing room shows at some of the biggest and best clubs in the city (including headlining many shows at the monthly Homocorp at the infamous CBGBs). As a touring band, Lisa Jackson & Girl Friday were one of the few queer bands at the time that were being featured at Pride events around the country, where they shared the stage with bands such as The Psychedelic Furs, The Motels, and Pat Benatar. Prior to her years with Lisa Jackson & Girl Friday, Lisa worked as an actor and singer in NYC, performing in numerous regional productions in theaters such as Goodspeed Opera House, Alabama Shakespeare Company, and The Ordway Theater. In 1999, Lisa toured the country in the National Touring Company of THE BUDDY HOLLY STORY, which also starred TRANS AM director Fred Berman.

“I cannot wait for Lisa to get to share her story and journey and music with a live audience,” Berman explains. “Lisa herself was ‘born’ on the stage, performing music that presented her truth, emotional vulnerability, and strength to a live audience in a packed club in downtown Manhattan. TRANS AM has always been a continuation and extension of the story she began telling the world in that dingy rock club almost 22 years ago – a story of self evaluation, self acceptance, and empowerment, all set to the soundtrack of kick-ass, sing-along rock music.”

Fred Berman is a New York-based actor and musician who is honored to be making his DC directing debut with TRANS AM at Keegan. As an actor, he has performed the role of Timon in Disney’s THE LION KING on Broadway for the last ten years, as well as performed with The Public Theatre, Transport Group, Soho Playhouse, and many other New York and regional theaters. Fred also played drums with Lisa Jackson & Girl Friday.

TRANS AM runs January 29 – February 26, 2022 with evening performances Thursdays – Saturdays at 8:00 pm and matinees on Sundays at 3:00 pm. To find more information about TRANS AM or to purchase single tickets, build a custom tickets package, or learn about group discounts, visit www.keegantheatre.com.